My Name is Art: Pat Collins 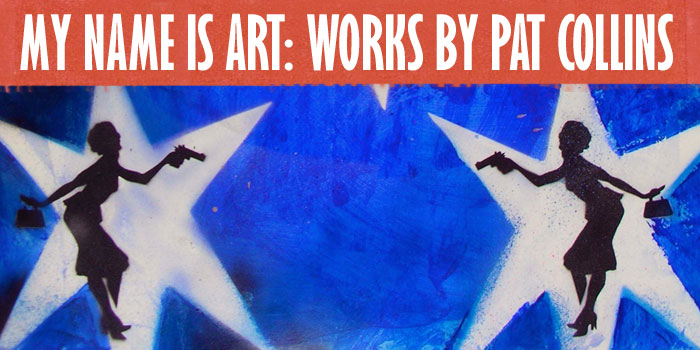 HOWL Gallery presents “My Name is ART”, a new exhibit by Pat Collins. In developing her artistic style, Pat was drawn to the graphic look of artists' stencils created for the street, posters, and galleries while living in NYC and began experimenting with her own. After moving to Fort Myers, stencils became the basis for her series of mixed media paintings exhibited at the John & Mable Ringling Museum of Art in 1996. She incorporated her stencils into the etching process and later in gelatin printmaking techniques, which she demonstrated in a 2010 workshop for local art teachers.

Acrylics, spray paint, paint sticks, graphite combined with stencils, rubber stamps, collage, and printmaking allow her to mix that graphic edge with painterly texture and drawing. Working with themes and imagery that combine a carnivalesque attitude with social commentary, some paintings focus on a single image while others are more layered compositions.

Stenciled and stamped stickers connect back to her original inspiration, and landed her work in a national traveling exhibition, the "STUCK-UP Tour: A History of Sticker Culture", which culminated at Scope Miami 2011. Other recent exhibitions include "A Community of Artists", FGCU; "Stencil & Candy", Art Modern Gallery, Miami; and Verge Miami Beach 2010.

Opening reception for “My Name is ART” exhibit at HOWL will be held Friday, March 2nd, in conjunction with the downtown Fort Myers Art Walk, from 6-10pm. Light refreshments provided. Free event. The exhibit continues through the end of March.

Stephen Hayford is an award-winning photographer, working in photojournalism for more than 20 years. His journalistic work influences his art, which is approached from the perspective of a documentarian. Hayford creates elaborately detailed dioramas which he populates with customized action figures which are less than four inches tall. He then photographs these unique scenes with great attention to light, subtle gestures, and compositional storytelling.  Thus he creates realistic, and sometimes exaggerated, portraits of human behavior in plastic.Hayford’s interest in plastics grew out of his childhood fascination for toys and passion for Star Wars. He channels this youthful passion as an official artist for Lucasfilm. His personal work reflects the peculiarities he encounters as a Florida resident.

Robert Hendrickson was born and raised in Los Angeles, California. At a young age he showed an interest in the arts that eventually lead him to the Art Center College of Design. Since launching his career as a freelance illustrator, Robert has created artwork for the entertainment, advertising, book and magazine industries. Past and current clients include Lucasfilm, The Jim Henson Company, Time Inc, Topps, IDG Entertainment and more. In 2005, Robert began officially creating artwork for the Star Wars universe. His work can be seen in the pages of Star Wars Insider to limited edition prints for Star Wars Celebration IV, V and Star Wars Celebration Japan.

The opening reception for “Galaxies United” will be held Friday, April 1st, in conjunction with the downtown Fort Myers Art Walk, from 6-10pm. The evening will also be a celebration of HOWL Gallery/Tattoo’s 2 Year Anniversary, and will feature a raffle with a portion of the proceeds benefitting the Animal Refuge Center in North Fort Myers. The exhibit continues through April. For more information, please visit www.howlgallery.com, www.stephenhayford.com, or www.roberthendrickson.net.